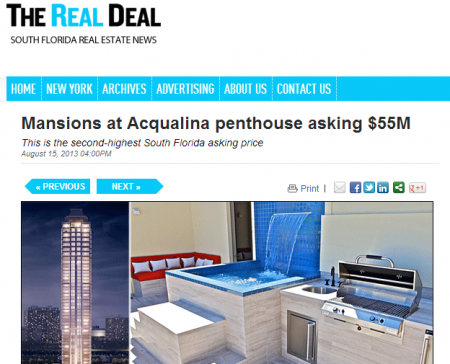 Given his status as one of South Florida’s leading luxury real estate specialists, it’s not too surprising that William Pierce would be featured in one of the region’s top real estate publications, The Real Deal.

His informative press release about the $55 million penthouse at Mansions at Acqualina was referenced in an August 15th article about the same property. William Pierce’s expert knowledge received validation by being cited in one of the top real estate resources in South Florida.

The Real Deal article also made mention of another newsworthy accomplishment of his:

In March, Pierce closed the $34 million sale of a combined-unit penthouse at the Residences at the Miami Beach Edition, making it one of Miami’s priciest penthouse sales ever, as previously reported.

This same record-breaking achievement earned the attention of several prominent media publications, including the Wall Street Journal and Forbes. To this day, local real estate circles are still abuzz about this sale, which remains a testament to William Pierce’s trustworthiness, professionalism, and effectiveness. No one has sold such peerless Miami Beach Condos as much as he has.

This proven track record has earned William Pierce over a dozen awards in recognition of his outstanding performance. NRT Inc has ranked him as one of its top sales associates multiple times, while Coldwell Bankers has more than once awarded him the prestigious International President’s Circle. That’s why when William Pierce lists or discusses a property, everyone is listening.

All this reflects his personal work ethic and values. Known for his motto, “It’s as good as sold,” he raises the bar of real estate service. His innovative website, Perfect Property Purchases, delivers the most up-to-date and vital information about the Miami real estate market. He and his award-winning team have connected thousands of buyers and sellers through the internet, social media, and their effective relocation department. He offers a customized plan individually tailored to each client and their property, reaching buyers from all over the world. As the results clearly show, this unique strategy is unmatched.