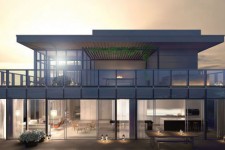 Miami‘s luxury housing market has been hitting new highs since last year. First there was Eddie Lampert’s $38 million Indian Creek  purchase last March, then a Russian scion’s record-breaking $47 million purchase a few lots away in August. On the condo side, a series of high-rise homes gracing the Miami Beach coastline have consecutively shattered apartment records since late 2011.

Add another huge sale to the list. On Wednesday, an anonymous American buyer plunked down $34 million for two unfinished side-by-side penthouse units in The Residences at the Miami Beach EDITION, an up-and-coming luxury hotel-condo hybrid developed by Studio 54 co-founder-turned-boutique hotelier Ian Schrager.

Together, the units represent the biggest condo sale ever in Miami, Fla., eclipsing the $27 million commanded by the Setai’s Penthouse B in January and the $25 million commanded in 2012 by a penthouse in the Continuum.

“This record-breaking sale exemplifies the wonderful flexibility that Miami Beach offers,” said William P.D. Pierce of Coldwell Banker ResidentialReal Estate, who represented the buyer, in a statement. “People in the ultra-luxury market own multiple properties and they are seeing the advantage of the many services that are offered in buildings like The EDITION.”

The newly purchased penthouses will span 16,271 square feet of living space spread across three levels, including more than 6,000 square feet of outdoor space. Together the units boast eight bedrooms, 11 bathrooms and 360-degree views of Miami, the bay and the ocean. Each apartment has fireplace-bedecked master suites and living rooms, 20-foot-tall great rooms, and private elevators that access every floor. Each touts a rooftop garden with private swimming pool, outdoor kitchen and glass-enclosed dining area.

Expected to be completed by April 2013, the penthouses will sit 16 stories atop the Miami Beach EDITION hotel, a splashy new resort being developed by Schrager in partnership with Marriott International in the former Seville Beach Hotel. The 26 “limited-edition” condos will inhabit the top floors of the existing hotel building as well as a new 18-story tower being constructed next door. Residence owners will have access to all of the hotel amenities, including a Jean-George Vongerichten restaurant, a nightclub, a bowling alley and an ice skating rink.