News » Home Inspired by ‘The Great Gatsby’ Gets a Price Cut

Home Inspired by ‘The Great Gatsby’ Gets a Price Cut 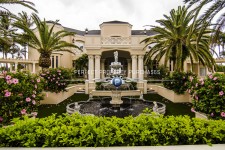 Built in 2001, the house was inspired by “The Great Gatsby,” according to listing agent William P.D. Pierce of Coldwell Banker Residential Real Estate, and has 32-foot ceilings, a polished limestone fireplace, a stained-glass bar, a sound-proofed movie theater, a wood-beamed library and a 14-car garage. There’s also a solarium, sky deck, guest house, two elevators, and a swimming pool with 14-carat gold inlays. The house is fronted by 205 feet of private beach.

The home is owned by Sharon Nicholson, the widow of Bill Nicholson, who founded with his family Retail Grocery Inventory Service (RGIS), a company that helps grocery stores track their inventory.

She first attempted to sell it in 2007, when she put it up for auction with a listed price of $33.5 million. Just before bids would be accepted, however, she canceled the auction. In 2008, she put the home on the market for $24.9 million, later lowering the price to $22.5 million. It has been on and off the market since 2008.