Dubbed Le Palais Royal, the 11-bedroom, 17-bathroom home, seen in a rendering here, was inspired by the Palace of Versailles and other European palaces and castles, said Denio Madera, the Miami-based architect and interior designer who is handling the interior design of the home. Bryan Nieblas

A 60,500-square-foot home under construction in Hillsboro Beach, Fla., is listed for $139 million. Many agents believe it is the most expensive listing in the country.

Dubbed Le Palais Royal, the 11-bedroom, 17-bathroom home was inspired by the Palace of Versailles, and other European palaces and castles, said Denio Madera, the Miami-based architect and interior designer who is handling the interior design of the home. Surrounded by a gate that is decorated with 22-karat gold leaf, the house includes a $2 million marble staircase, a subterranean garage that can accommodate 30 cars and an 18-seat IMAX home theater with a 50-foot-wide screen. There are three master suites and a presidential suite, each with its own Jacuzzi in a windowed circular rotunda (the presidential suite also has a plunge pool on an outdoor terrace). 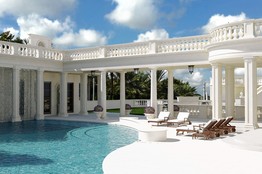 Outside, there’s a 4,500-square-foot infinity pool with salt, chlorine and UV filtering as well as an LED-lit, double-loop waterslide. This is a rendering of the exterior. Bryan Nieblas

Outside, there is a 4,500-square-foot infinity pool with salt, chlorine and UV filtering as well as an LED-lit, double-loop waterslide. Suspended above the pool is a glass-bottomed Jacuzzi. “It’s supposed to feel like you’re floating over the pool,” said Mr. Madera.

The entire home was built to be soundproof. The home’s South African marble floors were insulated specifically so the clacking of high heels will be muted, added William Pierce of Coldwell Banker Residential Real Estate, who has the listing. The house is built with an elaborate security system as well as kennels for guard dogs on the lower level. The house sits on 4.4-acres with 465 feet of waterfront on the Atlantic Ocean and 492 feet of waterfront on the Intracoastal Waterway.

Between Boca Raton and Fort Lauderdale, Hillsboro Beach is a small community consisting of large condominium buildings and just a few dozen single-family homes. According to Carmen D’Angelo, a broker with Premier Estate Properties, a Christie’s International Real Estate affiliate, the highest price home sale in the area so far was $17 million earlier this year. Mr. D’Angelo said he will soon be listing a speculative home in Hillsboro Beach for $45 million.

It may be the most expensive listing in the country: A Florida property listed for $139 million. WSJ Mansion reporter Candace Taylor joins the News Hub to talk about this and other beautiful private properties. Photo: Bryan Nieblas.

Mr. Pierce says the owner of Palais Royal had the land appraised a year and a half ago for more than $40 million, and has spent over $75 million on construction and design to build the home so far. Joseph Leone, the owner’s representative and the project manager who has overseen the home’s construction, said the home has been under construction since 2009 and is slated to be completed by the end of 2015.

Mr. Leone said the home has been many years in the making because of its large size and the way it is being constructed. Built atop 350, 150-foot underground pilings, the home and the roof are made entirely of poured concrete, and interior walls are paneled with plaster molding. The result is very sturdy and built to resist any storm. “The things you don’t see are basically double the cost, and take double the time,” said Mr. Madera, the designer.

According to public records, the property is owned in a trust tied to Robert Pereira, the founder of Middlesex Corp., a Massachusetts-based construction company that also has offices in Florida. Mr. Leone said the owner is selling because he just finished building a yacht and wants to spend more time traveling.

The home’s $139 million listing price tops the $135 million asking price for a Beverly Hills, Calif., home formerly owned by William Randolph Hearst. A property in Los Angeles’s Holmby Hills neighborhood has reportedly been shopped around for $150 million, though it isn’t officially listed.